Providing Welfare Service Within and Across Contested Borders: The Activities of Civil Society Organisations in Transnistria and Abkhazia 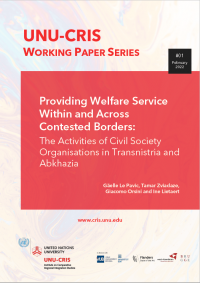 When the USSR ceased to exist, a bordering process occurred not only between the 15 newly independent Republics, but also within some of them. This happened as conflicts froze, resulting in the formation of several entities labelled as de facto states. De facto states have received quite some attention from a geopolitical perspective. This scholarship shows that de facto statehood has a negative impact on locals’ daily lives and that Civil Society Organisations (CSOs) are essential in providing welfare services. However, what CSOs are doing in terms of social welfare services provision, whom they are targeting, and how this particular context impacts their functioning, has never been investigated. This working paper aims to address these gaps by focusing on CSOs providing welfare services in two territories whose borders remain contested: Abkhazia and Transnistria. This is done by mapping the presence of CSOs providing welfare services within and across the de facto borders.

This paper is based on desk research in which we systematically searched for, first, donors active in this field and, second, CSOs providing social services in Abkhazia and Transnistria. We also analysed databases, policy documents and reports about how donors and International NGOs (INGO) frame their priorities, interact with local CSOs and the de facto state’s authorities. Hence, this desk research enables to understand better what CSOs are doing in term of social welfare provision, whom they are targeting, and within which legal context respectively in Abkhazia and Transnistria.

The result section shows a relatively high number and diversity of CSOs providing social welfare services within the two selected de facto states, with some of them receiving the support of international donors and organisations with whom their priorities align. Youth, children - including those with special needs - and women appear as the main target of projects whose scope is to enhance their economic and social inclusion and address some difficulties they face in life (e.g. domestic violence). De facto borders resulting from the de facto statehood impact the functioning of CSOs not only by being selectively closed (in particular for Abkhazia) but also via a range of de facto bordering practices such as different legislations and citizenship policies. Importantly, both de facto states find themselves at the crossroad of different geopolitical projects: the European Neighbourhood policy and its Eastern Partnership component on one side, and the Russian led Eurasian Economic Union on the other side. These global components also produce local social effects including in the provision of social welfare services by CSOs active in Abkhazia and Transnistria. 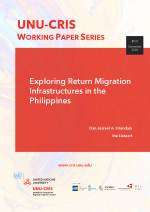