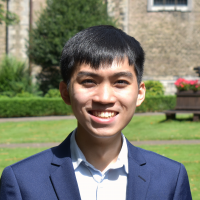 Hugo Tai received his Bachelor's Degree in East Asian Studies (Politics and Economics) from the National Taiwan Normal University, where he focussed on democratisation, authoritarian politics, social media and computational social science. Specifically, he combined experimental and computational methods with survey and social media datasets to address public support for democracy and authoritarian regimes in East Asia. He continued to develop his research by pursuing a Master in Comparative Politics at the London School of Economics and Political Science.

Prior to joining UNU-CRIS, he had worked for several public sectors and research institutions, including the Hong Kong Economic and Trade Office, Taiwan Parliament, Taiwan WTO Center, China Guangzhou Arbitration Commission, Centre for Strategic and International Studies Indonesia, Asian Barometer (largest cross-national survey project in Asia), Academia Sinica (national academy in Taiwan), among others. Besides, he had presented his works at academic conferences in the US, the UK, France, Japan, China and Taiwan. He had also received a method training at the University of Michigan and Hong Kong University of Science and Technology. His works had been supported by, among others, the Taiwan Ministry of Science and Technology, Political Studies Association, Peking University, and National Taiwan Normal University.

During his internship at UNU-CRIS, he worked under the research programme “The Role of Regions in Global Governance” under the supervision of Andrew Dunn.