The Influence of Shifting Power 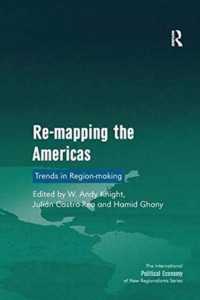 Since the end of the Second World War the map of the Americas has changed dramatically. Not only were many former European colonies turned into sovereign states, there was also an ongoing process of region-making recognizable throughout the hemisphere and obvious through the establishment of several regional agreements. The emergence of political and economic regional integration blocs is a very timely topic analyzed by scholars in many disciplines worldwide. This book looks at remapping the recent trends in region-making throughout the Americas in a way that hasn’t been at the center of academic analyses so far. While examining these regionalisation tendencies with a historical background in mind, the authors also answer fundamental questions such as: What influences does globalization have on region-making, both on normative regionalism plans as well as on actual economic, political, cultural, military and social regionalization processes driven by state and non-state actors? What ideas or interests lead states in the Americas to cooperate or compete with one another and how is this power distributed? How do these regional agreements affect trade relations and have there been trade barriers set up to protect national economies? What agreements exist or have existed and how did they change with regard to contents and for what reason?