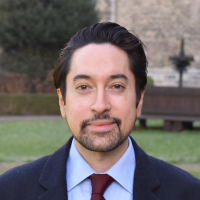 Konstantinos holds a Master of Science degree in Global Studies and International Relations from Northeastern University (Boston, Massachusetts, United States) with a specialisation in Diplomacy. He had previously obtained a Bachelor of Arts in Political Science and Public Administration from the University of Athens with a concentration in International and European Studies. He has worked in a School of Journalism lecturing in Political Science, International Relations, and Foreign Policy. After completing his Master’s degree he has worked as a research assistant for a think tank focussing on the European institutional framework and EU foreign policy.

He has also undertaken extensive research on United Nations Security Council (UNSC) Reform and has presented a proposal for a new decision-making model for the UNSC at the Research, Scholarship and Innovation (RISE) Expo at Northeastern University. His research on the subject explained how this approach would enhance the UNSC's overall functionality significantly and more importantly, the effectiveness of its decisions and resolutions, increasing the democratic accountability and transparency of the UNSC procedural dynamics.

At UNU-CRIS his internship was under the research programme “the Changing Patterns of Regional and Global Governance” under the supervision of Madeleine Hosli until April 2019.