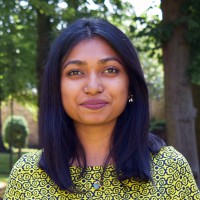 Maisha Fairuz worked on the ‘The Role of Regions in Global Governance’ programme and focussed on exploring the relevance of two main theories of European integration – “neofunctionalism” and “liberal intergovernmentalism” -when analysing recent processes of European economic and monetary integration and the role of Europe's monetary union in the world. Apart from the internship, Maisha was a student at the Central European University, pursuing a Master’s Degree in Economic Policy in Global Markets. She completed her Bachelor’s in Liberal Arts and Sciences from Maastricht University and her curriculum mainly focussed on Economics and Development Studies.

After her Bachelor’s, she returned home to Bangladesh and worked at the Institute of Informatics and Development, a think tank that focusses on public policy research with a special emphasis on the citizens’ right to information. Maisha’s research interests include global governance, regional integration, and global political economy.

Upon completion of her internship at UNU-CRIS under the supervision by Director Madeleine Hosli and co-supervision by Ewout Ramon until the end of August, Maisha resumed her Master’s studies in Budapest.