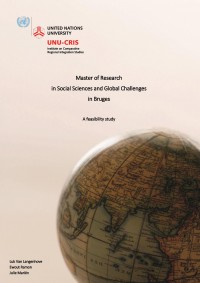 This report is a deliverable of a study undertaken by UNU-CRIS aimed at assessing the feasibility of developing new Higher Education initiatives in Bruges. There are two dimensions to this feasibility. On the one hand there is the desirability of such initiatives. On the other hand there are the possibilities and constraints. The present report maps and assesses both dimensions with regard to the feasibility of starting a Master of Research (MRes) in Social Sciences and Global Challenges in Bruges.
The results of this study are intended to serve as suggestions to those who are interested in establishing new higher educational initiatives in Bruges, and as an information resource for all stakeholders concerned.
This report has been made possible thanks to the support of the Euregion Scheldemond - which is a transnational partnership between the provinces of West Flanders, East Flanders and Zeeland -, the city of Bruges, the Province of West Flanders, University College Roosevelt and UNU-CRIS. Its results are intended to serve as suggestions for establishing new higher educational initiatives in Flanders, and as an information resource for all stakeholders concerned.
The research has been conducted by Ewout Ramon and Julie Mariën under the supervision and guidance of Luk Van Langenhove. It has been edited by Andrea Hak.

Tools for an EU Science Diplomacy 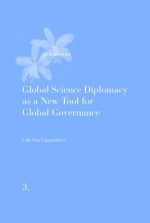 Global Science Diplomacy as a New Tool for Global Governance 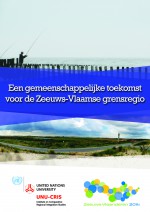 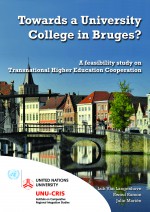