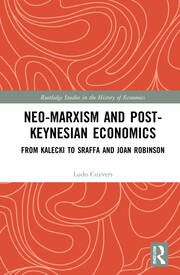 Piero Sraffa and Joan Robinson, both iconic Cambridge economists, were highly influenced by the economic theory of Karl Marx, and integrated important elements of Marx’s economic system into their theories. This book argues, based on published and unpublished documents, that the work of Sraffa and Robinson can in fact be considered as essentially post-Keynesian neo-Marxist.

The first part of the book reviews the intellectual development of several key thinkers to this neo-Marxist current in economic thought: Kalecki, Steindl, Baran and Sweezy. Part One and Part Two separately examine Robinson and Sraffa’s works and questions how they fit into this specific neo-Marxist current, either building on it (in Robinson’s case), or following another direction (in Sraffa’s case). Part Three observes Robinson’s theory of economic growth and its relationship to the views of Marx and Kalecki. Overall, Cuyvers demonstrates how their thought processes share characteristics with neo-Marxist key ideological ideas, such as stating or implying the labour theory of value as either redundant or wrong, emphasising the role of class struggle in the distribution of income and rejecting Marx’s falling rate of profits.

Following on from ideas briefly introduced in Cuyvers’s Economic Ideas of Marx’s Capital (2017), this book will particularly appeal to readers interested in the history of economic thought, the work of Sraffa, Robinson and Marx, post-Keynesian economics and neo-Marxism.

Special Issue of the International Journal of Manpower: the Labour Market Consequences of ...