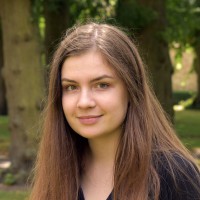 Born in Ukraine and raised in Russia, Olesya moved to the UK to receive higher education at the University of Bristol upon completion of her school studies, which had a specific focus on languages, history, social sciences and music. After taking the International Foundation Programme, where she was awarded the CELFS Academic Potential Prize, she was enrolled in the Bachelor’s programme in Politics and International Relations. Olesya engaged in multiple academic and non-academic activities, such as student representation, student consultation on university projects (“Bristol Futures”) and peer mentoring. She was also a volunteer for Bristol European Green Capital initiatives, a library assistant to the nationally-recognised SS Great Britain Brunel Institute, and a foreign trainer for the educational project GROW in Romania, co-managed by AIESEC & Scoala de Valori.

She participated in a range of MUN simulations (ReadiMUN, UC3MUN, RomeMUN, SEIMUN and C’MUN) which sparked her interest in Public International Law, specifically in the embryonic field of Cyber Law and Cybersecurity, and its relation to Humanitarian and Criminal Law. A co-authored article about the politicisation of the International Criminal Court and a panel paper on the regional fragmentation trends from the political and legal perspectives for IAPSS 2017 World Congress (where she was also a grant recipient), as well the WSIS 2017 Forum under the ITU in Geneva which she attended as an ELSA observer, are first steps in the direction of this engagement. Olesya worked on a paper on the regional and interregional judicial cooperation in prosecution of cybercrimes (first part published) during her internship. She hopes to further pursue LLM in International Law and Security or a similar specialisation.

At UNU-CRIS she worked under the supervision of Director Madeleine Hosli and Ewout Ramon until the end of September.