Rhetoric or Restraint? Trade in Military Equipment under the EU Transfer Control System 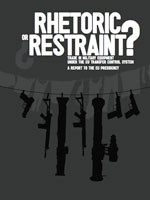 More than two decades ago, EU Member States began developing a common framework to ensure their decision-making on military exports took into account political and moral concerns that were being raised in their constituencies. The EU Code of Conduct on Arms Exports, agreed in 1998, represented a major milestone in that process. A decade later, the politically-binding EU Code was cast in concrete when it was transformed into a legally-binding Common Position defining common rules governing control of exports of military technology and equipment. While the system is a distinct improvement on what went before, and the level of control exercised in the EU is in many ways setting the global lead, the EU system is still far from perfect. In some cases this would appear to be because the rules are not being applied with sufficient rigour; in others because the rules themselves are inadequate to the task. While acknowledging that in most cases the system works as intended, this report concentrates on the unfortunate exceptions. It seeks to analyse cases where poor arms transfer decisions still appear to be taking place, to identify patterns of poor decision-making where they exist, to consider why such patterns exist and to suggest remedies. One of the patterns that revealed itself through this analysis was that military equipment sales of a certain magnitude create economic (or other) pressures to export such that the restrictive criteria of the EU Code/Common Position can be overridden. And yet, such an outcome is explicitly forbidden in the relevant EU instruments. The report highlights, for example, major sales of naval equipment to sales to Israel, Morocco, Russia and Venezuela that were approved or supported by Member State governments when there were good reasons under the EU criteria to question the deals. This practice is seen to generate inconsistencies in EU attitudes, whereby exceptional and large deals might be approved while smaller transfers to those same destinations are refused. Other cases were identified where large economic interests did not appear to be at stake, e.g. for transfers to Chad and Mali, but where issues regarding development, human rights and (sub-) regional stability were to the fore. Various factors would seem to come into play here, e.g. colonial legacies, perceptions that the equipment concerned might help to create the conditions for the end of hostilities and improve prospects for long term development, belief that the use of military force against the opponents to the intended recipient is justified. Supplies to Sri Lanka are also interesting in this context, as several EU Member States were supplying Sri Lanka as either conflict or the threat of conflict was escalating, but the scale of those transfers was not large enough to suggest an economic motive. In all of these instances, suspicions are raised that decisions were not being based, as the EU Code/Common Position demands, on the conduct of the recipient and against the risk that certain negative consequences may ensue. The report also identifies an apparent disparity regarding the way Member States assess and respond to the risk of diversion of exported arms. Information on denials suggests that this is among the most rigorously enforced criteria, however there do appear to be some blind spots. The report details how many small arms of EU origin have eventually found their way to several non-state groups in the Colombian conflict, despite never having been officially transferred to Colombia. These repeated instances of diversion occurred notwithstanding the fact that at least some Member States seemed to appreciate the risks involved as small arms exports to Latin America were being refused due to a risk of diversion on a regular basis. A number of suggestions of how to reduce the risk of repeating a Colombian-type situation are included in the report, primarily involving better gathering, sharing and processing of relevant information. One case study in this report, which investigates EU Member State involvement in the probable supply of Ukrainian tanks to South Sudan, highlights the legal void in which European transport companies involved in this transaction were able to operate. There is also an examination of the way in which the EU arms transfer control system is not set up to respond to circumstances where arms sales are secured by or involve corrupt practices. A number of cases are presented, for example the multi-billion-Euro South African procurement from EU Member States of military equipment in the late 1990s, which might have had a different outcome had the EU Code/Common Position included an “anti-corruption” criterion. Related to this is an analysis of the ways in which arms export promotion is sometimes built into the institutional structures and arrangements of governments, which again tends to militate against universally rigorous implementation of the criteria, and the report contains proposals for limiting any pro-export bias.