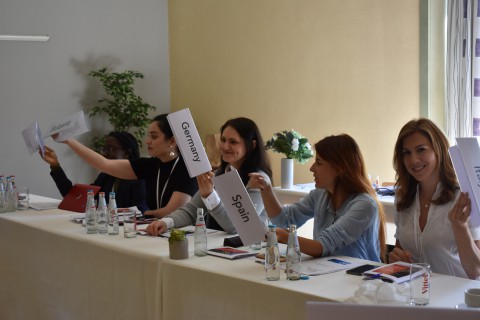 We began Friday with session two of the simulation game on the migration crisis. The draft agreement prepared by the different participants was presented by France to the European Council President. The debate on the financial contributions and budget allocation was heated, with the Northern and Central European countries like Austria, Estonia and Denmark diametrically opposed to the calls of the Southern European countries of Spain, Italy and Bulgaria for more financial resources to go to the frontline states. Both France and Germany tried to play a conciliatory role to find a glimmer of consensus they could build an agreement upon. But alas, their efforts were to no avail as the Council decided to postpone future decisions to a later date. The only agreement the Franco-German engine of Europe was able to pull from the wreckage was an agreement to create hotspot offices in the countries of origin. It was a tremendous loss for the states pushing for solidarity amongst the nations of Europe. Then the debate continued towards the reform of the Dublin Regulation and the Schengen Agreement. Once more the nations were valiant in defending their interests with the Southern European frontline states and the richer Western European states arguing for a mandatory relocation system of asylum seekers. But the Eastern nations were united in their vehement opposition and rejoiced when all possible reform attempts of the Dublin Regulation and Schengen Agreement were completely taken off the table. As such, the Simulation Game concluded clearly showing the discord and difficulty to find consensus that is present in the European Council. 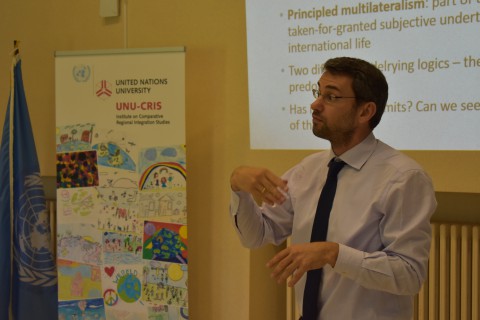 Thereafter, we had a wonderful lunch at the Great Seminary’s refectory. We were served a delicious soup and as main course enjoyed a mix of white fish, salmon and Atlantic cod with mashed potatoes. The desert were several exquisite freshly baked apple galletes which greatly stimulated the summer school’s discussions around the lunch table.

To finish off the last day of week one, we had a lecture by Professor Spyros Blavoukos of the Athens University of Economics and Business on the topic of Principled Multilateralism and the UN. There we discussed the organisational conflict inside the UN system between the principled organisation of the United Nations General Assembly (UNGA) and the instrumental organisation of the United Nations Security Council (UNSC). Professor Blavoukos made the argument that the old fashioned and power centric focus of the UNSC might lead to the downfall of the United Nations as less and less nations will consider it a legitimate body that takes their interests into account. He continued into discussing the different UNSC reform proposals throughout the years and what they all merited and why they faced stringed opposition. Ideas like equal geographical representation, the argument of economic power and more were discussed among in an interactive dialogue between the Professor and the summer school participants. It left everyone with much to consider and think about on the future of global governance as we rounded off the last day of the first week.