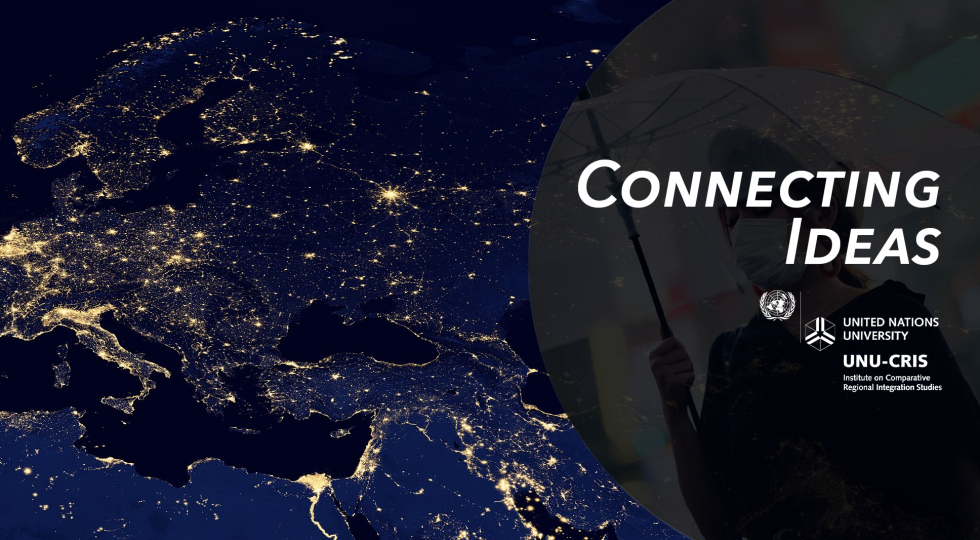 This post was originally published on the UNESCAP blog on 14 February.

A common saying has it that when America sneezes, the rest of the world catches a cold. However, with China’s economic rise, this phrase is yet to gain another spin.

In the face of a new virus (COVID-19), China is reportedly shutting down production lines, domestic consumption is weakening and growth forecasts are being revised downwards. As a result, experts around the world are now rushing to understand the true impact of China’s economic integration.

From an international trade perspective, China has a dual role in global markets: it is both a major consumer hub and the largest global supplier of goods. For that reason, a coronavirus-like shock can quickly spread via forward and backward trade and production linkages.

For instance, carmakers like Nissan and Hyundai have already reported assembly lines shutdowns amidst GVCs disruptions in China, while travel-bans have caused major revenue problems in tourism-dependent economies.

As a direct result of the virus, ESCAP estimates that Asia-Pacific’s GDP growth could decline between 0.6% ($132 billion) and 0.8% ($172 billion) in 2020. Moreover, global goods and services exports and imports are expected to drop by 7% and 9%, respectively.

However, potential losses will be spread unequally across Asia-Pacific. For instance, economies like Australia, Mongolia, Republic of Korea, Viet Nam and Taiwan Province of China are over-exposed to China, exporting as much as 5% of their total GDP to the country.

Particularly, China is an important buyer of primary products, such as agricultural and mining commodities, from Australia, Malaysia and Mongolia; technology intensive goods, such as electronics and machinery, from Republic of Korea, Singapore, Viet Nam, and Taiwan Province of China; as well as labour-intensive goods, such as textiles, leather and paper, from Indonesia, Thailand and Viet Nam (figure 1).

Accordingly, these economies and specific sectors are expected to be hit the hardest with the forecasted slowdown in China’s domestic consumption. 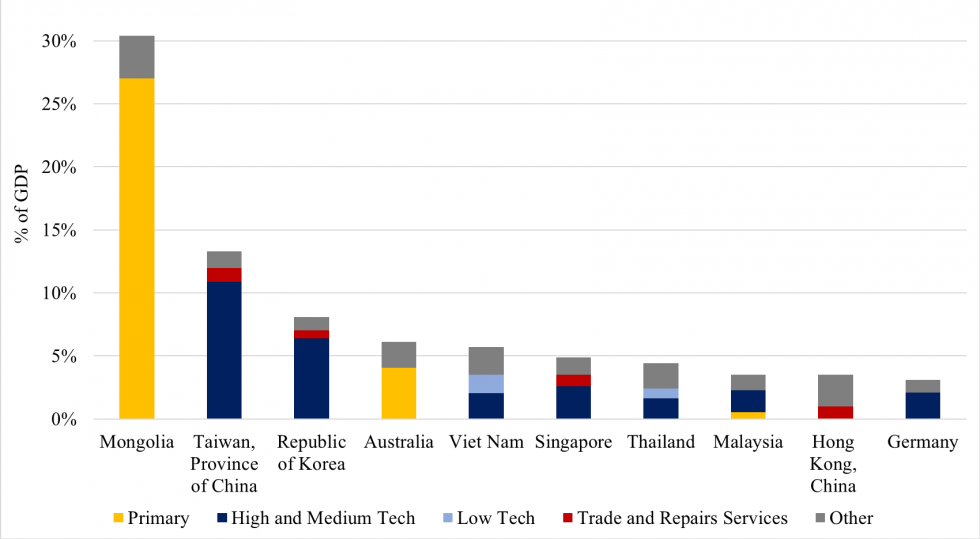 Source: Authors based on ADB MRIO Input-Output table analysis.
Notes: Top 10 economies with the highest share of GDP consumed in China were selected.

Moreover, due to this shock’s nature, tourism is one of the most affected industries. So far, over 40 countries have limited entry to foreigner visitors from China and the country has reported 73% fewer international trips during the Lunar New Year holiday, compared with 2019. For heavily tourism-dependent economies like Cambodia, Maldives or Thailand, this could become a major source of concern as this sector contributes to more than 10% or their GDP, while tourist arrivals from China make up for over 15% of all international arrivals. 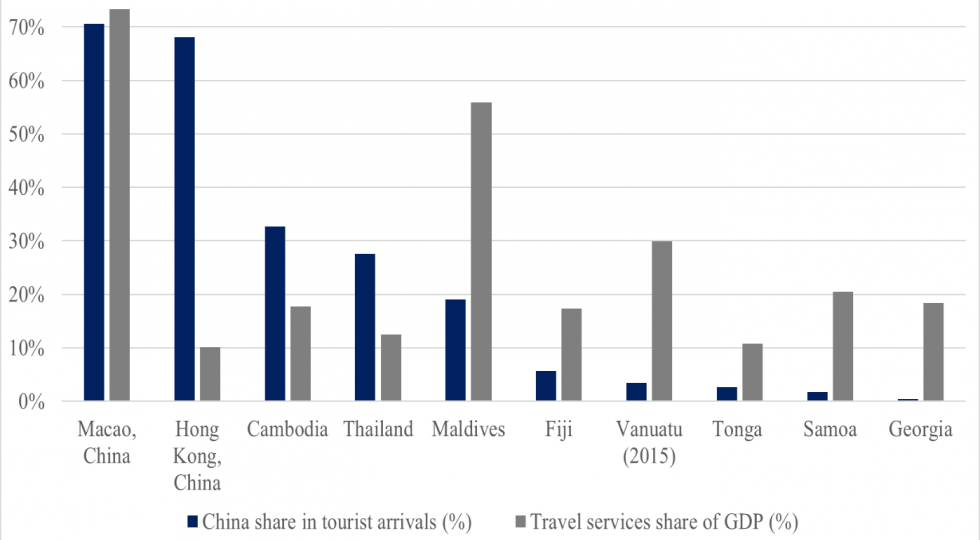 Source: Authors based on UN-WTO data.
Notes: Top 10 economies with the highest share of China’s share in tourist arrivals were selected.

On the other hand, China has also played a vital role in supplying important intermediate and final goods to Kyrgyzstan, Lao PDR, Mongolia, Viet Nam, and Hong Kong, China. These economies imported the equivalent to 9% to 14% of their total GDP from China (figure 3). 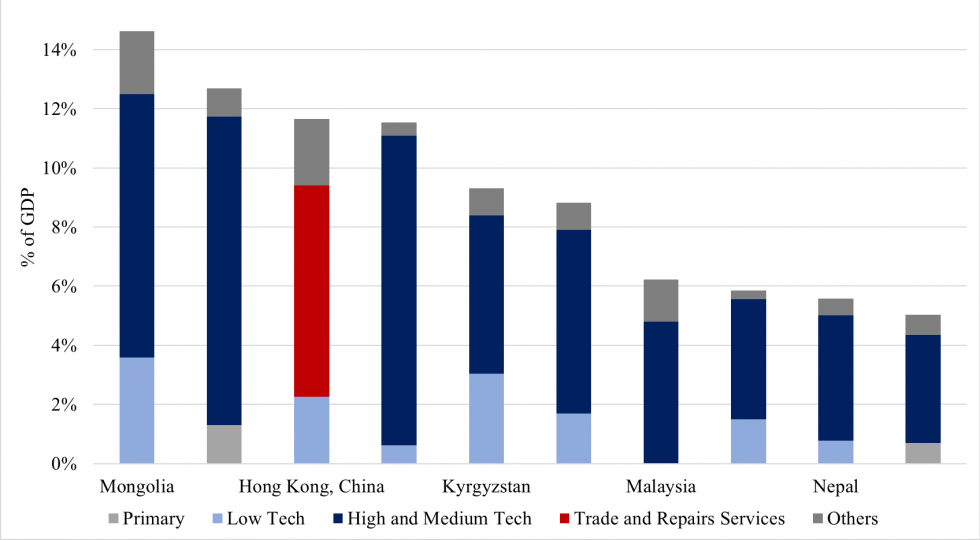 Source: Authors based on ADB MRIO Input-Output table analysis.
Notes: Top 10 economies with the highest share of GDP sourced from China were selected.

Ultimately, the coronavirus episode is yet another reminder of how GVCs are bringing countries’ economic faiths together. Indeed, by revealing the true depth of economic integration, the current disruption is helping to expose the substantial costs of delinking China from the rest of global economy. Globalization is no longer about business transactions between companies or governments only; it now contains ever-increasing people-to-people engagement. Frustrating this interconnectivity will have more than economic costs.

Moreover, in an environment of increasing protectionism and isolationism, the COVID-19 is set to become a stress test to both China’s role in the global economy and the way in which nations cooperate to respond to external shocks.

Global value chains have made its participants truly co-dependent. They rise together, but also fall together. This requires that in the face of a common external shock a response must involve cooperation. For that reason, as UN’s regional arm in Asia-Pacific, ESCAP can provide the right platform to coordinate a timely answer that best protect all players’ interests in a cooperative equilibrium.