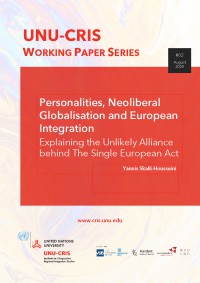 This working paper explains the appearance of the unlikely alliance between Delors, Kohl, Thatcher and Mitterrand behind the Single European Act (1986). As the first major revision of the Treaty of Rome (1957), the Act kickstarted the relance of European integration after a prolonged period of Eurosclerosis in the 1970s, that ultimately cumulated in the foundational Maastricht Treaty.

We establish that although the focus on, more often than not, stereotypical characterisations of the four leaders – consisting  of a  French socialist, a virulent anti-federalist British neoliberal, a committed leftist European and a German Christian-Democrat – is to a certain degree important, one has to look at more structural and global trends to explain the genesis of the Act. Neoliberal globalisation and the dawn of the Second Cold War are singled out as the most important trends that shaped and interacted with the European policies of the four main actors.

In trying to deal with them, they found an appropriate framework in the Single Market Programme, their lowest common denominator for European Integration. Lastly, we emphasise the fact that the alliance was an unbalanced one, which helps us explain how Thatcher was pressured into compromise. Junior partner in the coalition, Commission President Delors, is described as a visionary pragmatist who understood the institutional constraints he faced.