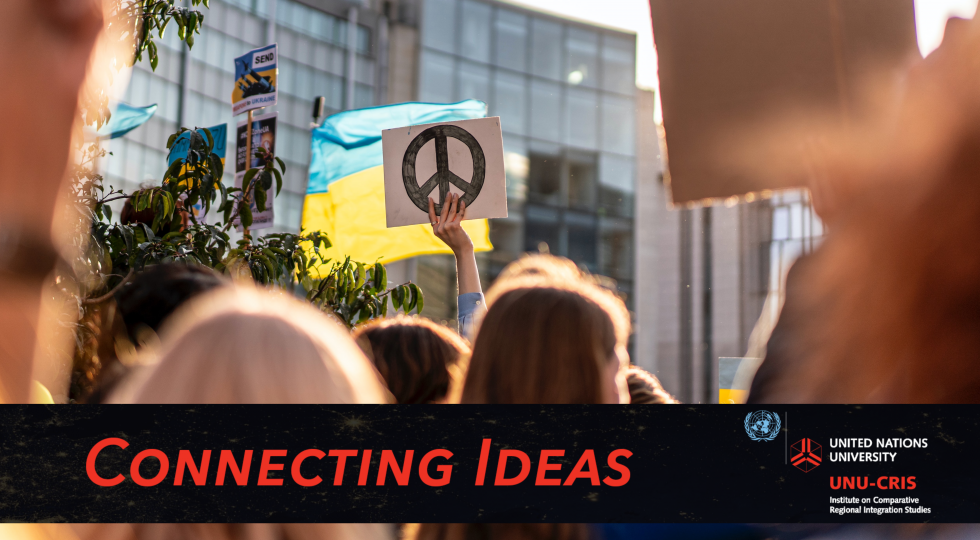 Since the beginning of the ongoing war in Ukraine, over 7.7 million people have been internally displaced. These internally displaced people (IDPs) have mostly fled to the northwestern parts of Ukraine, with almost six millions escaping the country. Most of them are hosted in neighboring countries. According to UNHCR data, most of Ukrainians fled to Poland (3,143,550), Romania (856,941), followed by the Russian Federation (727,712) among which some have been forcefully displaced. In Moldova, 452,038 Ukrainians are currently displaced in a country of just over 2,6 million inhabitants and the poorest GDP per capita in Europe after Kosovo. According to the data by the International Organization for Migration (IOM), 80% of these refugees are women and girl and almost half of them come from the mostly Russian speaking Odessa region. In this tragic context of war, pendular migrations are observed with some Ukrainians going back and forth, mostly from Poland but also from Slovakia, Hungary, Romania and Moldova to Ukraine.

For some Ukrainians, the possibility of going back to Ukraine from time to time or as soon as possible, is the main reason to remain in Moldova. For the displaced Ukrainians who have the possibility to stay with relatives, this temporary solution is becoming a long-term option, as the war continues. Others are renting or seeking to buy an apartment in Moldova, mostly in its capital city, Chisinau. For those with no relatives, nor resources to rent or buy properties, the shelters hastily opened by the Moldovan government and mostly operated by Civil Society Organisations (CSOs) are the remaining solution. During their stay in Moldova, finding food and hygiene products can be a daily struggle for people escaping the war. At the Moldovan/Ukrainian border in Palanca and along the road to Chisinau, many Moldovans are coming along to serve tea, hot meals and give clothes. Yet, there are also cases of abuse from drivers overcharging rides to human traffickers taking advantage of a war situation when male Ukrainians national between 18 and 60 are prevented to leave the country at a time of general mobilisation.

From March to June 2022, I had planned a research stay together with a Transnistrian Civil Society Organisation (CSO) as part of a PhD on access to social services in Abkhazia and Transnistria and the impact of de facto borders and bordering practices on CSOs providing these services and people accessing them. After one year of online data collection, I was rejoicing about the perspective of conducting a long-term fieldwork thanks to a promising partnership with a Transnistrian CSO. Although conducting fieldwork is an epiphenomenon when war is close and dramatically changing the life of millions of people, it pushed me to question the role of a researcher in such a situation. It was not safe enough to leave for fieldwork in Transnistria on the 5th of March 2022, given the volatile situation, but the question about alternatives remained. Finally, the decision was made to go and volunteer in Moldova for two weeks, conscious that this will be a rather modest contribution and will not substitute the fieldwork initially planned. I spent about 40 hours in what used to be a barbecue bar. As I arrived, the place was already bustling with people coming in, going around, and leaving with plastic bags containing mostly food and hygiene products, sometimes linen and clothes. I met the daily coordinator, and she explained my duties as a volunteer: collecting information about people’s name, family name, phone number, number of adults and number of children; the help given and the help needed (but not available) such as baby carriages, some food products, or the most wanted hygiene item often unavailable: washing powder.

We also checked the date of passport stamps since people had to have entered after the 24th of February 2022. I first followed an experienced volunteer and then started helping the Ukrainians myself. It was very moving to see that most people were immensely thankful for basic food and hygiene products. As I helped one person after another, I was thought that most of them are coming to seek help for the first time. As I checked their passport stamps, I saw in one case when the previous stamp was from a sea resort in Egypt. As days passed, the queue outside got longer and longer, some people coming inside to collect products were exhausted after a long wait. Not only more and more people were coming, but also the UNHCR started using the former barbecue bar to pre-enroll Ukrainians for a cash programme assigning a 200 euros allowance. The registration was done by two staff members on tablets that occasionally broke down and significantly slowed down the products distribution. This made me reflect on the role of international organisations, in particular UN agencies in such circumstances. Contrary to small scale organisations which can start operating almost instantaneously, international ones need to follow a series of processes, from assessing the situation to release funds, before providing large scale support. In emergency situations such as dealing with consequences of the war in Ukraine, the fast and flexible approach of non-formal organisations enable to fill a gap in support provision, sometimes with very limited human and financial resources. In six weeks, an initiative that started in a former barbecue bar grow, building partnerships to serve over 38,000 Ukrainians. This included 7,847 individual or family walk-in visits, 175 requests from communities, organisations, and registered refugee placement centers, as well as 11 border point requests across the Moldovan territory.

These figures communicated by the organisers to the volunteers do not include Transnistria whose status remains disputed. In 1991, Transnistria parted from the rest of Moldova and developed a separated de facto statehood over 30 years. At the beginning of May 2022, 30,000 Ukrainians fleeing the war were displaced in Transnistria.  With several explosions occurring since then, the situation may be deteriorating further. Ukrainians who are in Transnistria are mostly hosted by relatives, some of them are renting accommodations whereas about 300 are using one of the five reception centers set by the de facto authorities. As of the start of May, since the beginning of the war, 1,703 Ukrainians have stayed in centers operating by the de facto authorities who have opened a 24/7 hotline dedicated to support Ukrainians fleeing the war. It would be interesting to further investigate how the specific status and context in Transnistria impact the support provided to Ukrainians and how those fleeing the war adapt to these circumstances. Ukrainians staying in Transnistria have to register to the Transnistrian authorities and get the status of “temporary residents”.

With this temporary status they can work and access free healthcare. Ukrainian children are also able to attend schools and kindergartens in Transnistria and according to the Transnistrian de facto Ministry of internal affairs, 503 Ukrainian pupils are schooled and 326 go to kindergartens. Among those schooled, 129 are educated in Ukrainian, which is an official language in Transnistria together with Russian and Moldovan. De facto authorities and local CSOs, together with volunteers are involved in the provision of a first humanitarian support. The local Healthcare Platform gathering NGOs active in the field of healthcare has made an assessment of the refugees’ needs and have received support from the Confidence Building Measure (EU-CBM) Programme to address them. Facing de facto authorities’ concerns about shortages in medicines, hygienic items, clothing, and footwear, as well as food in medium to long term perspective, a more comprehensive approach via the EU-CBM progamme is envisaged. The United Nations (UN) is working on a cash-support scheme, including the host families as it is the case for Moldovan hosting Ukrainians in the territory controlled by Moldova where 3500 lei (about 175euros) is granted to Moldovans hosting at least two Ukrainians fleeing the war. Transnistrian inhabitants who have a Moldovan ID and can prove they are hosting Ukrainians, are eligible to this cash support but must travel to the territory controlled by Moldova to receive it, as no monetary transfer can be made to Transnistria because of a different banking system, a different currency (the Transnistrian rubble) and overall, a different institutional system, not internationally acknowledged and thus remaining de facto. It remains to be seen what effect the de facto borders and subsequent de facto bordering practices have on Ukrainians transiting and staying in Transnistria to escape the ongoing war in Ukraine.