This Research Report provides an analysis of the EU’s official discourse with respect to four human rights crises: the humanitarian crisis during and after the conflict in Gaza between Israeli forces and Hamas in 2008-2009; the crisis caused by the Lebanon war of 2006; the humanitarian disaster of the Sudanese province of Darfur (2003-2010); and, finally, the political, social and economic crisis in Zimbabwe (2001-2010). The case studies analyzed in this Research Report reveal a number of similar trends, as well as some stark differences. In order to systematize the findings of the study, we have summarized the key elements of each case study according to the overall conceptual categories driving this research.

Del 5.4 Paper on Human Rights Violations.pdf
Project:
The EU as a Global-Regional Actor in Security and Peace (EU-GRASP) 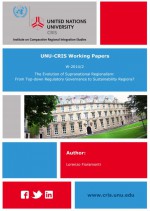 The Evolution of Supranational Regionalism: From Top-down Regulatory Governance to ...

The EU and (Regional?) Insecurity in the Horn of Africa